Check out the added section of newspaper articles on the Buggy below! 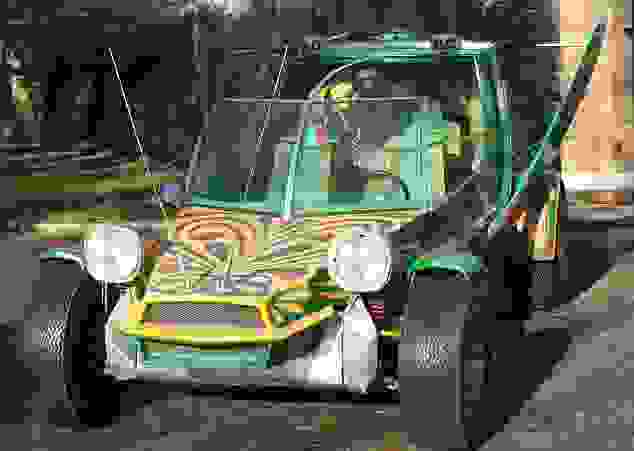 Update - January 1, 2020 - With the closing of the London Motor Museum and further research, the location of the Buggy at this time is unknown.  Any information is greatly appreciated.  I will continue to look for the Buggy.

A Barris Fun Buggy four-passenger fiberglass body was used as a  base for the hockey stick silhouette design of the Bugaloos Buggy, featured on "The Bugaloos" television series.  Since the concept of the  show, starring Martha Raye and the four Bugaloos, showed the group with wings enabling them to fly, it was determined logical for the car to "fly" and to "ride" on water.  The buggy was equipped with two large flapping butterfly wings, and twin screws installed under the rear body for high-powered water sporting.  Oversized headlights looked like the eyes of a bug, while the taillights were tunneled portholes that illuminate at night.  Wide oval Firestone tires were installed on Ansen  one-piece sprint wheels.  The interior was individualized for each Bugaloo - each star having his/her own telephone system and Muntz stereo tape system with individual earphones.  The buggy was painted in a  green, yellow and orange butterfly theme with orange and purple pinstripes. - Cars of the Stars, ©1974

2012 - Sold again at auction, the Buggy  now resides at the London Motor Museum.

2009 - Seen in public for the first time since being sold at auction in 1983, the Bugaloo  Buggy was featured in a car show in Sweden, April 10-12, 2009.  Along with new owner, Gary Hillman, George Barris attended and signed the Buggy!

"George loved it and done a piece on TV about the car.  I also built some new wings and got them fully working as well.  It really did look like it came alive when they started flapping!" - Gary Hillman

2007 - The Buggy was auctioned again and, after 20 years in France and little known about it's history in between, I am happy to say the Buggy is back in the light with new owner, Gary Hillman!  The Buggy is now in London and in the process of being fully restored.  In fact, the Buggy  will be shown for the first time in over 30 years in a car show in  Sweden in April, 2009.  George Barris is also scheduled to attend - what  a reunion!

2003 - The Bugaloo Buggy was uncovered in underground storage in France.   There is some speculation as to why it, along with other film/TV cars  from the Cars of the Stars auction 20 years prior, was kept hidden.  Hidden due to an unpaid financial transaction?  Unfortunately, the  original wings were lost (reportedly lost in transit from the US to France).

1996 - The Bugaloos buggy was another television show car constructed especially at the Barris Kustom shop for Krofft Productions.  The  producers desired a small, wild-looking, fun buggy to incorporate into  their new NBC-TV series.  To supply an automotive interest for the  series, Barris built the buggy in late 1969 to be used in the 1970-71 TV season.  His motivation: The vehicle was to possess all of the fun characteristics that made the Meyers Manx dune buggy famous - yet push  the concept beyond the envelope with attention-getting color and design  elements.  The goal was a completely different and vibrant look.  Using a  four-passenger body mounted on a Volkswagen floorpan, the buggy  actually looked just like a bug - mixing well with the show's characters who could fly and walk on water like little flying insects.  The design  featured a T-shaped rollbar set over the rear wheels with a pair of  "wings" that gave the effect of an airborne bug yet allowed plenty of space for television camera maneuvers.  The chassis rolled on Ansen Spring alloy wheels, highlighted with orange spoked centers.  The fully fendered four-wheeler featured oversized headlights that looked just like bug eyes.  On the outside, the paint scheme was a wild combination  of green, yellow and orange applied to copy the markings found on a  butterfly's wing.  There was much more.  The interior was fitted with four custom bucket seats with leaf-like design elements that continued the buggy's nature theme.  Four Capitol Communications telephones and four Muntz stereo tape cartridge players were also installed.  A four-tone horn was on board as well, offering a distinct tone for each one of the characters.  Fully street legal, the Bugaloo buggy was used extensively in the show.  When the series was introduced to the airwaves, Barris contracted with model kit manufacturer MPC to design a  plastic model kit based on the program vehicle.  - Barris TV & Movie  Cars, 1996.

1983- The Bugaloo Buggy was sold at the Cars of the Stars collector car auction at the Sheraton-Universal Hotel on Sept. 25, 1983.  The auction catalog featured this write up: Another most creative TV show by SID & MARTY KROFFT, the Bugaloos, starred Caroline Ellis, Wayne Laryea,  John Philpott, John McIndoe, and Martha Raye.  BARRIS was given the  challenge to make the group's fantasy rod with BUTTERFLY WINGS mounted  on the sides of a BOOMERANG fiberglass bodied dune buggy.  This buggy was powered by a VW engine.  The buggy is equipped with four bucket seats and four telephones for the stars.  Multi-colors were sprayed and  combined with contrasting pin stripes by BOB BOND.  Quad KRACO units  were installed for music backup with the singing group.  This feature  toured the HOT ROD SHOW WORLD and ROD & CUSTOM EXHIBITS.